More than 400 people in Germany die every year as a result of a fire, with about 95% of these deaths due to smoke poisoning. 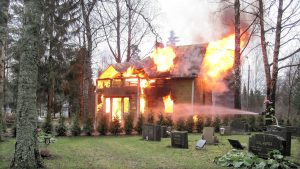 How does a fire actually occur?

First of all 3 factors must be present:

A particularly impressive video of a room fire caused by a fallen cigarette is provided by EI Electronics.

A sports jersey is placed on a radiator to dry. The plastic part of the jersey is about 40%. The flame-retardant temperature of the plastic is 250° C. The oxygen content in the room is approx. 21%. The electrical heating (thermal energy) has a max. conductor temperature of 1500° C.

When the jersey overheats, the actual firing process begins. The smoke rises, spreads under the ceiling and then sinks.

And this is the great danger – because fire smoke is

Within only 3! minutes the visibility decreases so far by the developed smoke that you can lose your orientation and can no longer get to safety.

By the way: Children under the age of 6 are particularly at risk in the event of fire, as they are more likely to hide than try to escape from fire or smoke. Therefore – in case of danger in children’s rooms, always check under the beds or in the wardrobe whether there are still children in the room! 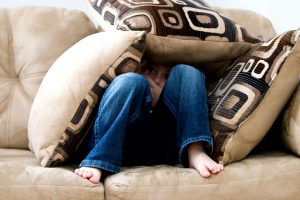 It is relatively easy to protect yourself against fire smoke poisoning by installing smoke alarms in bedrooms and corridors or in rooms which are the escape routes from such lounges/bedrooms.

Because 70% of fatal fires occur at night.

Where and how many smoke alarms should be installed can be read in another article.

But: In case of a fire or if the smoke alarm has triggered – How to behave?

Here you can inform yourself.

And still another tip for schools, pupils and educators: There is a great pupil competition “120 Sek. um zu überleben” also for International Schools in Germany to the behavior in the case of fire:

When the smoke detector sounds the alarm, there are only 120 seconds left to survive. What to do? The student competition for grades 7-10 is designed to help students learn how to behave correctly in the event of a fire and to communicate this knowledge through a creative campaign. Here is the student_competition_registration_and_explanation_2019 for schools

Attention: It is advisable to submit your application by 20.11.2019 at the latest.