On 03 March 2019, five people died in their single-family home in Nuremberg. Four people were seriously injured. The investigation is still ongoing.

Fire experts from the State Criminal Police Office searched for traces throughout the weekend, but even today the cause of the fire has not been clarified. And the investigators are dampening hopes that the information will soon be available because the house was so extremely destroyed by the flames.
Traces of fire can be seen all over the house, even the tiles above a skylight have burned through in the heat. The fire investigators could not determine so far whether the prescribed fire detectors were installed in the house. They concentrate above all on the search for the cause of the fire. 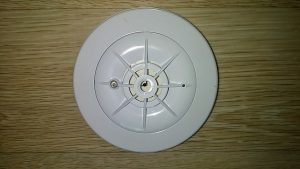 SMOKE ALARMS ARE MANDATORY IN GERMANY!

International regulations can be found here.

This applies to all federal states:

New buildings and conversions must be equipped with smoke alarms – by the owners. However, in most federal states it is the responsibility of the direct owners, i.e. the tenants, to ensure that the equipment is ready for operation.

The owners are also obliged to equip existing buildings, but transitional periods apply here until when smoke detectors must be fitted. The transition periods are regulated differently by each federal state. The only exception is Saxony. Here the smoke detector obligation applies so far only to new buildings and changes, not to the existence.

In view of such tragedies as in Nuremberg it is however beyond question that really everyone should pay attention to the fact that smoke detectors are attached in the appropriate areas.

In Rüsselsheim, an in-house fire ended well once again, thank God. The fire brigade had to extinguish a small fire in an apartment building. A mattress in one of these apartment caught fire, but only minor damage was done and none of the residents were injured.

Probably negligence was the cause of the fire.

Protect yourself by taking care not to leave any electrical devices, such as mobile phone batteries, on your mattress for long periods of time.

You will be even safer if you buy a flame-retardant mattress.

But then you should make sure to buy mattresses that are treated with a safe flame retardant.

In the night of 14 June 2017, a fire started in a skyscraper in the west of London. 72 people died in the Grenfell Tower fire. It was the worst fire catastrophe in Great Britain for decades and the catastrophe could probably have been avoided.

Lancaster West Estate residents organised themselves into the Grenfell Action Group in 2010 and, since 2012, when they were involved in planning the refurbishment of the Grenfell Tower, have regularly contacted the non-profit property management to draw attention to grievances.

In 2013, they published parts of a report prepared in the previous year that revealed significant violations of fire safety regulations. For example, parts of the fire-fighting equipment had not been serviced for three years. They documented their efforts in a blog.

It is absolutely incomprehensible that during the renovation of the skyscraper, the outer wall of which had previously been made of concrete, combustible materials could be used without an independent authority questioning or controlling this. To this day, the companies concerned say they were not to blame; after all, the administration and management knew what they were buying and ordering – insulation and cladding materials that were easily combustible.

During the renovation, Reynobond composite panels were used, which the manufacturer describes as “consisting of two stove-enamelled aluminium sheets”, “which are fused on both sides to a polyethylene core. Polyethylene has a melting point of 130 to 145 °C. The sheet, which can be produced inexpensively, is comparable to Dibond sheets in terms of layering and also achieves fire protection class B2 “normally flammable”.

It has been assumed so far that this design was installed on the high-rise building. There are two further versions of the panel with other core materials which achieve higher fire protection classes B-s1, d0 (“hardly inflammable”) and A2-s1, d0 (“non-combustible”) according to EN-13501.

However, these were probably not used for cost reasons.

A horrible example of a corporate culture in which profit takes precedence over safety.